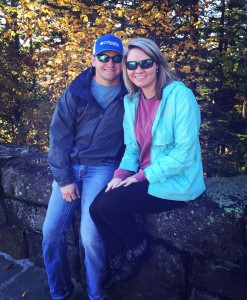 Jacquelyn (Bride to be) – My family loves to travel and visit new and some (old) or regular places.  We usually take a family vacation every fall, and this year my parents decided we would go to the Smoky Mountains.  I was so excited, I just love Cades Cove, and Justin was going to be able to take off work and go with us.  His parents decided they would go with us too which just made things all so perfect; little did I know how perfect it would actually be. The weeks leading up to this vacation were full of finishing up school projects for me, so when Friday came and it was time for us to leave I was more than ready to get this vacation underway.  Justin and I rode with his parents and I really enjoyed spending time with them.

We had all decided we would go to Cave’s Cove on Saturday and we would take some family pictures while we were there.  So the next morning my sister, Jaydn and  I woke up early so we could get all fabulous for the pictures. Lol. You would know it would start raining as we were all getting dressed, but after some “discussion” we decided we would go anyway, rain or no rain we would enjoy the day. It doesn’t take much for us to have fun together.  Laughing is something we do often around our house.  We just have so much fun being a family.  So you can only imagine how the day was going.  My Nana joined us on this vacation and let me tell you, she is amazing to be around.  She keeps all of us going and on our toes, but she is also one of my biggest role models that I look up to. It was turning into a perfectly beautiful day even though it was still raining.  We reached the bridge there at Cave’s Cove and took several family pictures, some just being our goofy selves and other serious. I wanted some with just me and Justin, so we decided we would take them out on the bridge. Oh, little did I know I was setting myself up for the perfect opportunity… 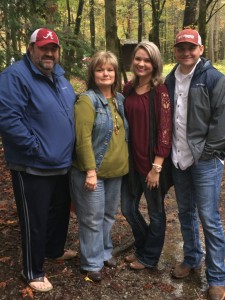 Jaydn (Sister) – Justin had asked my parents and I to help with part of the plan for the whole proposal. I will never forget the feeling of Joy I had when Justin asked me to be in charge of videoing the whole thing and making sure I kept her straighten out if she started getting suspicious about anything.  That morning I was so excited for Jacquelyn.  She had no clue what was about to happen, but I knew I had to keep things cool, which made me even more nervous.  When we finally reached Cades Cove, my nervous were on overload and I can only imagine what Justin was feeling. Things were going as planned and everything was setting itself up to be a perfect proposal.  After we had taken some family pictures, Jacquelyn wanted a few with just her and Justin so they “made” their way on to the bridge there.  This was my que to get the video rolling. My big sister was about to have one of dreams come true and I got to be there, how cool is that?

Jacquelyn –  Everyone began moving aside and I walked out on the bridge.  When I turned around to place my arm around Justin for the picture, he was not standing there…  Instead he was down on his knee with the most amazingly gorgeous ring in his hand and said, “Will you marry me?” I was in shock. Was this really happening?  Was the man God has for me asking me to be his wife? Were my dreams really coming true? I said, “yes” and truly felt like I was floating on clouds.  Things could not have been any more perfect. 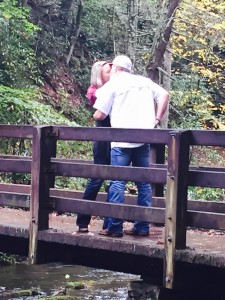 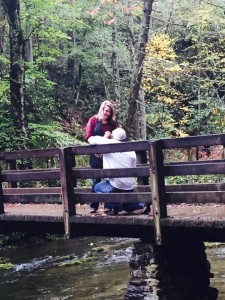 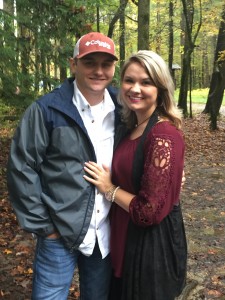 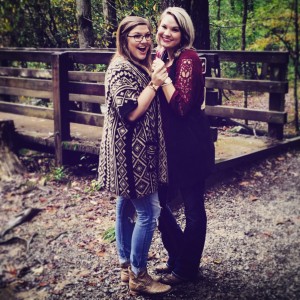 I had always thought I would know when Justin was going to propose because I would “know” something was up, but I have to say, ” I was clueless.”  He totally took me by surprise.  He took time to make sure so many details were a part of this moment.  He made sure my family and his were there to celebrate with us, it took place at one of my all time favorite places to be, and even thought to have it captured on film and video.  After we all celebrated for a while, we finished our drive through Cades Cove, and then were able to all go out shopping in Pigeon Forge with the whole family and ended the night with a family dinner. 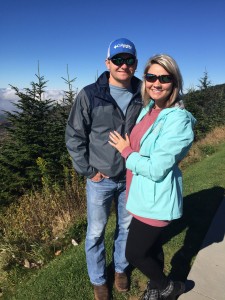 It was a perfect day from beginning to end even with the rain. 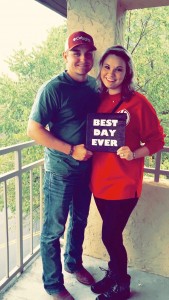 Dreams really do come true and this day I said yes to the man God designed for me.  I cannot wait to see what God has in store for our future together.  Let the wedding planning begin….