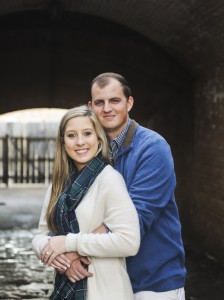 You never know what road life will lead you on, but the journey can be all so sweet when it is one designed by God.  Kellie and Timmy had known each other since high school, but never really had much more than an acquaintance of a relationship. After high school, life lead both of them in separate directions with Timmy going into the Police Academy and Kellie to college.  One day while driving to school Kellie and Timmy’s paths cross and a quick Facebook message to say hi and “I think I just passed you.”  A few months later another crossing of paths again while driving down the road led to another Facebook message and the beginning of a greater journey in life.  On November 28th of 2013 Kellie and Timmy began their dating relationship and life was oh so sweet.

It was getting close to their one year anniversary of dating and Timmy knew he was ready to make this gift God had given him more than just his girlfriend.  He was ready to ask her to be his wife.   He had a lot to do in order to get everything just right.  You see Timmy had a little bit of high expectation placed upon him to deliver a great proposal as his mom and grandmother have been in the wedding industry for many years.  His grandmother is the famous and fabulous cake designer Judi Freeman with Cakes By Judi (www.cakesbyjudi.com) and his mom helps run the business.  So the proposal couldn’t just be any proposal it had to be a great proposal and one that Kellie didn’t see coming.  With the help of his mom, the plan was set into motion.

Timmy’s mom and dad had “planned” family pictures to take place on Sunday November 23rd of 2014, and they asked Kellie if she would like to join them in the family pictures.  Kellie was more than delighted to receive such an invite and truly felt like she was becoming part of the family; little did she know just how much a part of the family she was soon going to become.  Timmy’s mom Kelly asked Kellie (yes, this may get a little confusing. I think a nickname will soon come to be.  loll) if she would go to the mall with her to help coordinate and pick out the attire for the family for the photo shoot.  With only a week until the “family photo shoot”, Kelly and Kellie set out to purchase and coordinate the attire for the family.  Meanwhile, Timmy was busy trying to find the perfect ring.  He had devised a plan to surprise Kellie and have the ring already sized to fit her finger.  The day before he had planned to go shopping for a ring, Kellie wanted to show him how she had organized some things in her room, and Timmy saw the perfect opportunity to take one of her rings. With the ring he had taken from Kellie’s room in hand, Timmy set out to find the perfect ring. He had been to one jewelry store and found the ring he wanted but was unsatisfied with the customer service he received so he went to another store (Zales) and purchased the same ring. He took the ring he had taken from Kellie’s room and gave it to the jeweler so the wedding ring could be sized accordingly, but he had to get the ring back in her room that day before she noticed it was gone.

Now it was time for Timmy to ask Kellie’s dad for her hand in marriage.  If you know Timmy at all, you know he is not a man of many words and his smile comes out really big when he gets nervous, so this made for an interesting time.  Timmy said to make things even bigger, Kellie’s dad was an intimidating man in stature, so he knew he need to somewhat have the upper hand.  Loll.  Timmy asked her dad to come over to his house.  After “talking” for a while, her dad was getting ready to leave so Timmy said “Well. Since you are over here.  I would like to ask you for permission to ask your daughter to marry me?”  It was a much awaited sigh of relief when her dad approved and gave his blessing on the marriage.  Whew, now all Timmy had to do was wait for the “family photo shoot in just one week.”

Timmy said the hardest part was waiting that week and keeping everything a secret with his parents and her parents both knowing what was about to take place and the fact that he had to keep the ring hidden.  He wanted Kellie to be totally surprised.  November 23, 2014 arrived and it was time for the family photo shoot which was to take place in Dauphin Island on the beach.  Everyone was looking sharp with their coordinating outfits.  The photographer, Photography by Jaclyn Robinson (Robinson Studio and Design), was getting things set and asked for Timmy and Kellie to go down to the beach and walk around so she could “get her camera set properly”.  This was the truth but it was also the means to get Timmy and Kellie alone on the beach in the location where Timmy wanted to ask the BIG question.  About two weeks before, Kelly (the mom) asked Timmy and Kellie to drive down to the beach look at different picture locations for the family shoot.  It was then that Timmy made note of one of Kellie’s favorite spots and knew this would be the location.

Kellie climbed up on some rocks and was walking around when Timmy asked her to come down off the rocks.  He was so nervous but even more so excited that this beautiful breath-taking woman was about to become his fiancée and soon to be wife.  As Kellie climbed off the rocks and approached Timmy, he dropped to one knee and asked her “Will you marry me?”  The look on her face was priceless and one of total surprise.  He was so excited to slide the ring on her finger and to have it fit perfectly, but to his dismay it was too big.  What happened? he thought.  He later told Kellie about how he had taken one of her rings so he could have the wedding ring sized to surprise her.  She laughed when she asked him which ring he took.  The ring he had taken was a ring to which she wore on her middle finger not her ring finger.  He did earn extra brownie points for being so thoughtful…  Timmy had planned for her parents to be there also, so they could watch from the parking lot.  After the proposal he tells Kellie that both of their families are there to celebrate with them.  They made their way to celebrate with their family, and after many hugs and happy tears, Timmy and Kellie began their engagement photo shoot, or one could say their new family photo shoot….  Thanks to a mom in the wedding industry, Kelly was able to help her soon to be daughter in law and son have coordinating outfits for their engagement portraits. The day was as perfect as Kellie had imagined it would be.  She was truly surprised and overwhelmed at how Timmy thought through so many details;  professionally photographed, proposal captured on video, her parents there with his to celebrate with them, and he was able to totally surprise her. 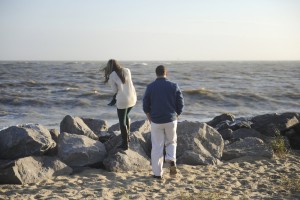 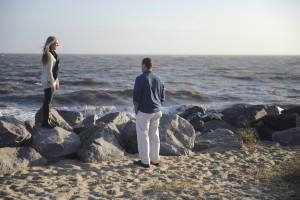 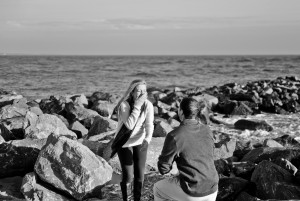 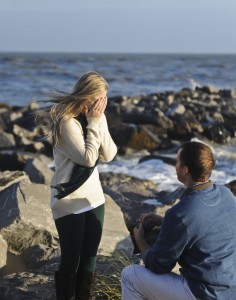 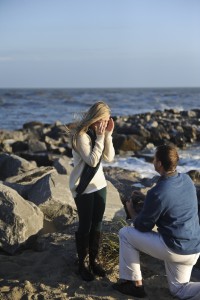 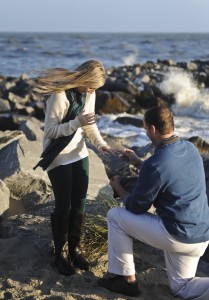 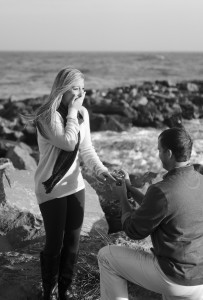 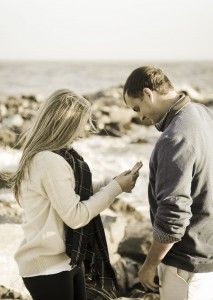 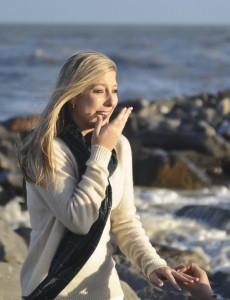 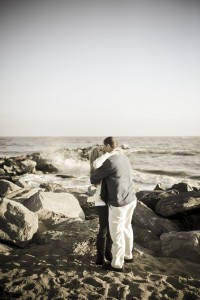 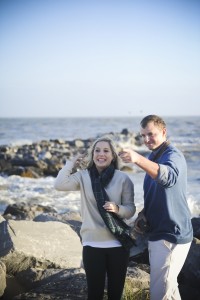 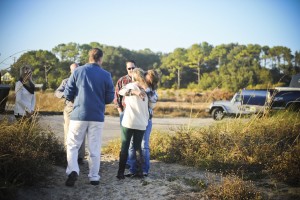 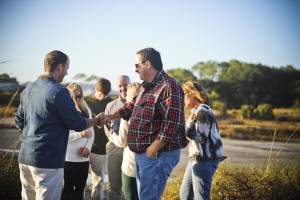 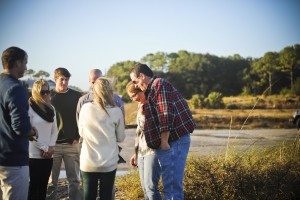 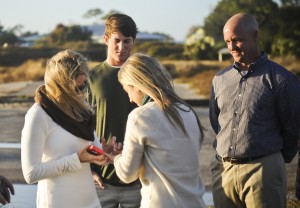 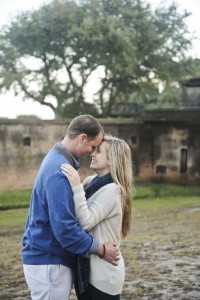 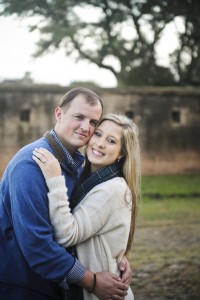 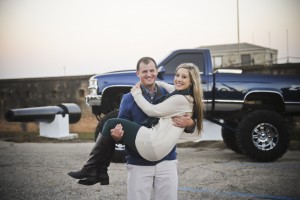 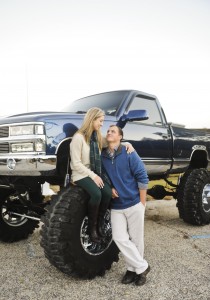 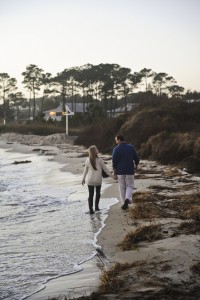 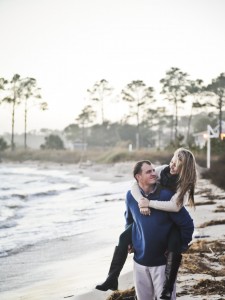 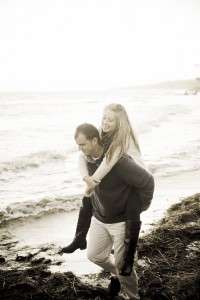 Sunday, November 23, 2014 was a great day.  A day where two families came together to celebrate the goodness and faithfulness of the LORD is seeing their children make a decision to become husband and wife in April of 2015.  Let the wedding planning begin.