November 17th, 2014 was filled with many wedding planning details and meetings as Madalyn and her mom set out to start their day.  They first met with their wedding planner and designer, Jessie Parnell with Agape Special Events, to tour the wedding venue and discuss design options and wedding planning details.  With the wedding set to be held at the beautiful The Old Place in Gautier, MS and the bride’s vintage inspired theme, there was not a lot of design details left to accomplish.  After touring the venue it was off to Mobile, AL to run a few errands before meeting with the baker.  Madalyn and Brandon had decided to use a well-known and fabulous baker in the Gulf Coast area and were so excited to be able to meet her in person.  The meeting was scheduled for 5:00pm with Mrs. Judi Freeman with Cakes By Judi.

Upon entering the bakery, they were met with an overwhelmingly heavenly smell of sweet treats and greeted by warm faces, and if you have never met Mrs. Judi, you have never had one of her fabulous heartfelt hugs.  Her sweetness is as sweet as her treats. 🙂 Brandon had to work late so he and his parents were planning on meeting Madalyn, her mom, and wedding planner there around 6:00pm so this gave Madalyn plenty of time to design her cake and also eat some yummy cake before they arrived.  Mrs. Judi began by asking Madalyn several questions in relation to her event details, which would help her in knowing exactly how the cake could and should be designed.  There is so much more which goes into the wedding and groom’s cake than one may realize and this is why it is always a great idea to hire a professional baker to handle this delicate sweet treat.  After answering some questions, Madalyn showed Mrs. Judi a picture of the cake she wanted.  Mrs. Judi began looking at the details on the cake and immediately began to figure the amount of servings Madalyn needed verses the amount the cake in the picture served. This arose a slight problem, though it was not one without a solution.  The cake in the picture served more servings than Madalyn needed.  Mrs. Judi suggested taking a layer away which was a repeat in the original pattern, and it would still give her the cake design she wanted and accommodated the servings she needed.  Now it was time for deciding the cake flavors and filling choices for each layer.  Wow, who knew there were so many choices and decisions to make with a cake?  The good news is that Mrs. Judi was ready to help her decide by providing her with sample cake and filling choices.  Now the decision making was much easier and everyone’s belly was more than happy to help out.  The cake design was finished and cake layer flavors and fillings were chosen, it was now time to work on the groom’s cake. 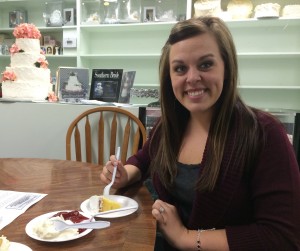 Not long after Madalyn was finishing up her wedding cake details, Brandon and his parents arrived to discuss the groom’s cake.  Madalyn had prepared Mrs. Judi that the groom’s cake was not an easy design, but Mrs. Judi was so ready for the challenge.  Brandon wanted a full bodied deer for his groom’s cake with horns and all.  Mrs. Judi said this would be a first for her in the way he wanted the deer positioned to be laying down but his head sitting up.  It was time to put on some major creative thinking hats.  After some time of thinking how this logistically could be accomplished, Jessie, the wedding planner, suggested utilizing the talent of Madalyn’s dad, Tab, to help with this.  Her dad and mom own a company called Yo Buddy Archery Targets (www.yobuddyarcherytargets.com) located in Lucedale, MS, where they design and manufacture targets for distribution.  Jessie said to Madalyn and Cathy, do you think Tab could design and manufacture us a mold of the upper portion of the deer’s body and then the main portion of body and legs could be made of cake?  Hummm, this could work stated Mrs. Judi and it would leave us with the serving count we need for the groom’s cake portion; that is if your dad is on board to do the head and shoulders mold for us. Brandon and his parents arrived and they were able to discuss the details which had been discussed as well as sample some delicious cake and filling choices. This groom’s cake was now in Daddy’s hands and this bride and groom were hoping Daddy could pull through.

It didn’t take much sweet talking by Madalyn for Tab to get on board.  He and Mrs. Judi scheduled a meeting to discuss logistics from her perspective of the things she would need for the mold to have and be able to do.  After meeting with the bride’s father, Mrs. Judi sat him, Cathy, and Madalyn down to sample some fresh out of the oven cake and icing.  She said dad was not able to attend the original meeting but that didn’t mean he had to miss out on the good stuff.  So all was set and the fabulous Mrs. Judi had a plan to create a picture perfect groom’s cake for this bride and groom. 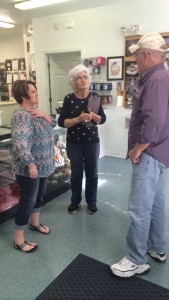 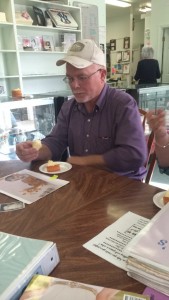 Hiring a professional baker for your special event is more than just hiring someone who can bake a delicious cake.  While the taste of the cake or dessert items are very important, it is equally important to have the peace of mind in knowing all the logistics which go into designing your cake are covered by someone who is trained and knowledgeable in their field.  You can have the perfect cake design picked out, but know there are logistics which you may be unaware of which need to be discussed.  Keep an open mind and willingness to compromise in design or budget in order to get your picture perfect dream.  Dreams do come true; sometimes you just have to have someone help you achieve or build them.

When the wedding day arrived this bride and groom were completed satisfied and thankful for the choice they made in hiring Cakes By Judi.  Their cakes were as picture perfect as their special day. 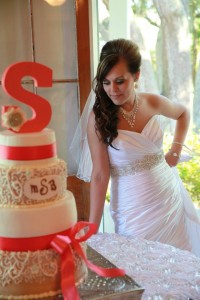 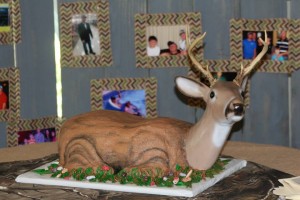 Cakes Provided By: Cakes By Judi